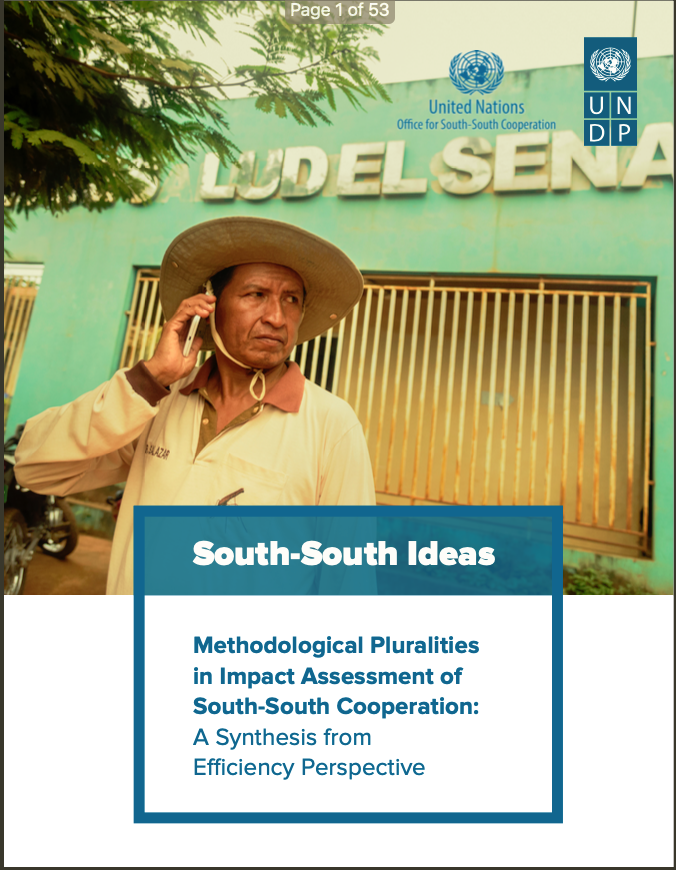 Plurality is the fundamental strength of South-South Cooperation (SSC). Such pluralities operate in terms of the governance structures of the countries belonging to the Global South. The internal institutional structures also exhibit pluralism that runs contrary to the ‘governance-related conditionalities’, which require the borrowing country to adopt ‘better’ institutions that improve ‘governance’ – the feature attributed as ‘Global Standard Institutions’ (GSI) (Chang 2011).

Set against the backdrop of the prevailing debate on developing a standardized template for impact assessment of SSC-related activities in development cooperation, the present study attempts to develop a set of methodological tools and indicators to assess the efficiency of SSC from the perspective of its distributive implications and its role in ensuring agency efficiency in terms of reduction in transaction costs of delivery of developmental inputs to partner countries in need. In doing so, it is centered on the fundamental recognition of plurality as the source of strength of SSC. The proposed template would entail active participation of NGOs, academia, CSOs, private sector and national governments, along with the other stakeholders in development cooperation to enhance peer learning and knowledge sharing on a voluntary basis.

The document is divided into 8 sections. Section 2 elaborates the extent of multi-layered plurality found among the countries that are involved in SSC and argues that the accepted plurality renders the development delivery system under SSC complex, unlike the model evolved by the traditional donors, which contains a linear simple systemic structure of development cooperation. The next section looks at the issue of effectiveness and efficiency of development cooperation and their contributions to the two opposing models of traditional aid and SSC. Section 4 delves into the history of these two strands of development cooperation models as they have evolved over the years since the end of the Second World War. The next section looks at the process of development cooperation as an exercise that involves the use of visible hands, unlike the market-led process, which believes in efficient allocation of resources through the operation of invisible hands. Section 6 distinguishes the two major approaches to development cooperation – the OECD-led approach and SSC as viewed through an analytical lens that throws light on the difference in the theory of change subscribed to by the two models. The penultimate section develops an assessment template for SSC in the light of the difference in approach to development. The final section contains a general conclusion and provides the relevant policy conclusions.

The present study proposes to look beyond ‘effectiveness’ and into ‘efficiency’ of SSC in delivering the development outcomes in a cost-effective manner, given the resource crunch that is leading to uneven development across the globe. However, the measurement of cost-effectiveness need not necessarily confine itself to ‘economic’ and/or ‘time’ costs alone. Any cooperation activity would potentially involve social, political, environmental and cultural costs for the recipient partners too. It can be further observed that while the traditional model of aid-based development cooperation relied on the ‘efficiency’ of a market-centred mechanism of resource distribution, SSC relies primarily on the role of visible hands through the different components of developmental support, as enshrined in the ideas of the ‘development compact’, involving a multitude of complementary modalities to reduce a potential rise in the economic, political and social costs of delivery to enhance its efficiency.

This process compares and contrasts the extant theories of change that differentiate the opposing models of cooperation in the development and proposes a different operational template to assess SSC. The proposed template includes three distinct components. The first component, designed to assess adherence to the principles of SSC, should be common to all partners engaged in SSC-related cooperation. This may be called process assessment and would ensure the extent to which the non-negotiable principles of SSC are being followed by the partner countries. The second component may be called assessment of the performance that would capture the modality-specific pluralities existing under SSC. The third component, exclusively left to the discretion of the partner countries, would be designed to assess the impact of SSC. Finally, it is argued that the assessment process will help strengthen the quest for social justice and equity among the partners in the Global South, augment the spirit of solidarity and trust, and identify a roadmap to further contribute to the allocative and technical efficiency of them all.