An article by Adriana Erthal Abdenur, Executive Director of Plataforma CIPÓ. CIPÓ is a think tank based in Brazil and dedicated to climate, governance, and peace issues in the Global South. CIPÓ is a member of the Southern Voice network. 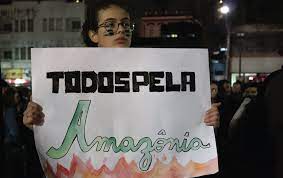 By neglecting South-South Cooperation, Brazil is missing a series of opportunities to project influence internationally and reap the concrete benefits from exchanging experiences with other developing countries. The lost chances are sharpest in the climate and environmental arena, a central space in the international agenda.

Nowadays, it is no longer possible to promote solidarity in South-South Cooperation without considering climate change and the ecological crisis — issues that permeate all other areas of life and decision-making.

Yet, little can be expected from the current Brazilian government in this regard. Domestically, President Jair Bolsonaro has accelerated dismantling of institutions that protect the environment and support traditional communities. His government has also backed legal changes that facilitate the expansion of environmental crimes such as illegal deforestation, illegal logging, and illegal mining in Indigenous Lands and Conservation Units.

In Brazil’s current foreign policy, South-South Cooperation has lost its prominent position, favouring far-right governments instead and undermining multilateralism. In addition to reducing the number of Brazilian embassies in developing countries, Bolsonaro has shut the door to important neighbouring countries, such as Argentina. He alienated strategic partners, such as France and Germany, created unnecessary political tensions with China (Brazil’s biggest trading partner), and turned away from key African partners, like South Africa.

How can Brazil revitalise a green South-South Cooperation?

Through the United Nations (UN), it is possible to launch new platforms to facilitate knowledge exchanges, technical cooperation, and sharing of best practices and experiences. The Conferences of the Parties (COPs) of the Conventions on Climate, Biodiversity and Desertification also offer spaces for greater coordination and cooperation among developing countries. The international community should pressure rich nations to put more attention and resources on climate adaptation, loss and damage, climate racism, and the biodiversity agenda. In all these areas, it is essential to increase the participation of indigenous communities, afro-descendants, and other groups and steer attention to generating green jobs in developing countries.

It is also possible to advance the climate and environmental agenda through initiatives that already exist but have lost steam in recent years. They include the Summits between South America and African Countries (ASA) and Arab Countries (ASPA), emphasising horizontal exchanges on Just Transition. Moreover, given the possibility of revitalising the BRICS, Brazil should propose new initiatives through networks of universities, research centres and think tanks, educational exchanges, and capacity-building in climate and environment.

Finally, given the urgency of increasing investments in a green recovery from the pandemic, Brazil must pressure the BRICS New Development Bank to formulate clear, transparent and objective criteria for investments in these areas. The bank’s central mission is to mobilise infrastructure projects and sustainable development resources.

It is also necessary to promote a regional framework to promote the Just Transition in Latin America. Appropriate solutions to the regional context that contribute to the prevention of environmental destruction, create dignified jobs and benefit women, including through the bioeconomy and green infrastructure, could be a game-changer for the post-Covid recovery.

There is an opportunity to deepen ties with other Amazonian countries. It can happen through the Amazon Cooperation Treaty Organization (OTCA) and the Leticia Pact for the Amazon, strengthening the monitoring and protection of the forest, promoting a more sustainable vision and “cleaning” commodity chains of environmental destruction and human rights and labour violations. Cooperation in the region should be seen as an element that boosts Brazil’s capacity to formulate and implement public policies, thus reinforcing national sovereignty.

Bilaterally, Brazil should resume its leading role in cooperation on public policies in agriculture (with greater emphasis on promoting food security and sovereignty and family farming), public health, education, and urban planning. There should be a greater focus on sustainable solutions, such as the bioeconomy, agroforestry and green cities. The full resumption of strategic partnerships with Argentina, China and South Africa will be essential, pursuing cooperation agreements focused on climate and environmental issues.

There is room for innovation in decentralised cooperation to promote, through South-South cooperation, a green and resilient recovery from the Covid-19 pandemic, taking advantage of arrangements led by subnational governments, such as the Legal Amazon Consortium.

Mobilising South-South Cooperation must be a central element of a fairer, more democratic, and more constructive Brazil at the international level.